Shawn Gandhi > Blog > Uncategorized > Square One is getting a makeover, and a new direction

Square One is getting a makeover, and a new direction

Erin Kleinberg is reporting from Toronto Fashion Week for Square One using Instagram and Twitter. If that piques your interest, you may belong to Square One’s new target market.

The staid shopping mall in Mississauga is repositioning itself to attract fashionistas, the type of people who know that Kleinberg co-founded The Coveteur and is CEO and designer of her own, eponymous fashion line.

When Square One opened 43 years ago, it was surrounded by open fields, said Greg Taylor, who took over as general manager last year.  That green space has since filled with civic buildings including Mississauga’s City Hall, the Living Arts Centre and Celebration Square. Perhaps more important, new condo towers along Hurontario St. and west of Square One have brought more shoppers closer. More condo towers in the area are planned.

Square One General Manager Greg Taylor and Marketing Director Toni Holley pose for a photo inside a renovated section of the mall.
TARA WALTON/TORONTO STAR

“Mississauga is maturing. There is a densification of the downtown. We happen to be a big part of that development,” said Taylor.

Right now, shoppers see Square One as a handy one-stop shopping destination, said Taylor, but it’s not necessarily top-of-mind for luxury shoppers or those looking to communicate social prestige or material success — the so-called aspirational shopper.

When its new, southern expansion is completed in the spring of 2016, Square One will house just over 1.8 million square feet of enclosed retail space, including the first Simons in Ontario (at 113,000 square feet) and a 120,000-square-foot flagship Holt Renfrew, which will launch the mall into the luxury market. The expansion will cost $237 million.

Owners Oxford Properties spent $84 million on a renovation in 2013 that added height and light to the main concourse, new flooring and an expanded food court. A $62 million expansion opened in September, adding new stores including Brandy Melville and the largest Forever 21 in Ontario.
The walkways are lit by natural light streaming in from clerestory windows. The new south wing will have the same airy feel.

The renovation includes a new emphasis on attracting professional, educated female shoppers, ages 25 to 45, who live in the GTA and love brands. Women ages 18 to 24 are a secondary target market. 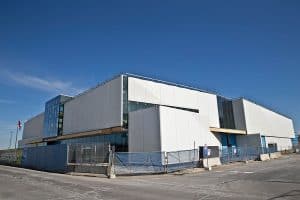 When its new, southern expansion is completed in the spring of 2016, Square One will house just over 1.8 million square feet of enclosed retail space, including the first Simons in Ontario.

To woo fashionistas, Toni Holley, marketing director for Square One, handed the shopping centre’s Instagram and Twitter accounts to industry insiders to post about fashion weeks in cities as they took place in February and March in New York, London, Milan, Paris and, this week, Toronto.

“I am literally just sharing what I see and what I hope might be interesting,” said Hanneli Mustaparta, reporting from Paris for Square One. Mustaparta is a photographer, director, model and blogger with a large following.

“I have never been to Toronto but I have heard from my friends that there is a really cool fashion scene.”

Square One’s effort to rebrand comes as malls in and around the GTA up their games, investing in renovations, new spaces and new tenants.

Having a single flagship store is no longer enough. Shoppers are looking for the right mix of retail banners in a mall and will not hesitate to drive 20 minutes or more to find it, Fleishmann said.

Conventional malls are also facing increased competition from discount shopping malls, Fleishmann said. It does help, for now, that the Canadian dollar has sunk relative to the U.S. dollar, making a shopping trip to Buffalo less enticing.

The advantage Square One has is that it remains a pleasant place to shop, without the crowding sometimes found at Toronto Eaton Centre or the parking headaches at Yorkdale.

“Half the experience of shopping at Yorkdale is finding parking,” said Fleishmann.
The expansion at Square One in Mississauga will cost $237 million.

TARA WALTON/TORONTO STAR
The expansion at Square One in Mississauga will cost $237 million.

Renovations and upgrades at area malls have been underway for years, sparked in part by the announcement in 2011 that U.S. discount retailer Target was expanding into Canada, and in part by interest from Seattle-based retailer Nordstrom in expanding north of the border.

Barwise pointed out that Toronto Eaton Centre is also in the middle of a major renovation, adding a Nordstrom to the space vacated by Sears. A Saks is scheduled to open in an area of The Bay on Queen St. in the spring of 2016.  The downtown mall also snagged popular Japanese retailer Uniqlo.

And there may be further change afoot.

“There’s a big question mark as to what is going to happen to Sears Canada in the next few years. If they decide to wind down operations, that’s another 100-plus stores,” said Barwise. Despite the increased competition from area malls, Barwise is not worried about the Eaton Centre being eclipsed.

“We get one million visitors every week. No one has that kind of statistics. And it’s just going to get better with the addition of Saks and Nordstrom,” he said.

With Target now shuttering 133 stores in Canada, some malls will lose what they had hoped would be a strong anchor tenant.

Still, retail landlords in Canada tend to have the upper hand. There are often waiting lists of retailers hoping to get into the Eaton Centre, Barwise said.

In Canada, almost two-thirds of malls are controlled by less than a dozen landlords. The market is much more fragmented in the U.S.

“Tenants in the U.S. and Europe have more power,” said Crombie.

“It’s rare to find customers today who only shop in one mall,” said Berkowitz.

get latest news & updates to your inbox