The Canadian federal government introduced new mortgage rules in the fall of 2016 to combat rapidly increasing home prices – but have they driven up condo prices instead?

In October 2016, Canada’s Department of Finance introduced a significant change to the mortgage qualifying requirements for buyers with less than a 20% down payment (known as a ‘high ratio mortgage’). Under the new rules, banks would have to calculate the maximum mortgage payment a home buyer could afford based on a new stress test rate which was based on the bank’s posted rate which was typically 2% higher than the discount rate that most buyers actually receive.

One of the intended goals of this policy was to help cool down the rapid increase in house prices, in particular in cities like Toronto and Vancouver but when we look at the data for Toronto, it actually had the opposite effect for the one house type that was still within reach of most first-time buyers – condominium apartments.

In January 2012, the average price for a condominium apartment was $321,475 and by the time the Department of Finance introduced this new mortgage stress test prices had climbed to $429,407 in October 2016.  A 34% increase in just under five years. 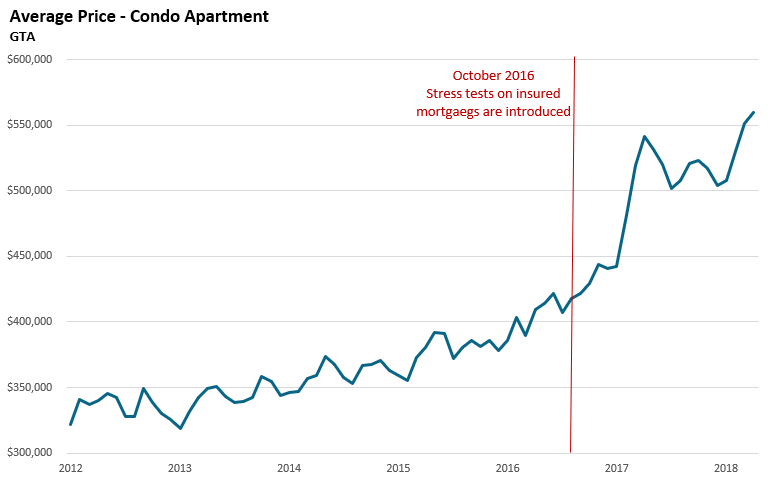 Rather than dampen demand and help cool prices the mortgage stress tests actually inflated demand in the condominium market and caused bubble like appreciation because the stress test pushed many first-time buyer’s budgets down making condominiums the only affordable option for them.

Some might argue that this is demonstrates why governments should not meddle with the housing market and should just let the market correct itself.  But I disagree.

The problem wasn’t that the government tried to cool the housing market, it’s that they tried to do too much, too late and likely targeted the wrong group of people.

Despite what finance ministers say publicly, the truth is that they are all addicted to the positive side effects that accrue when consumers take on more and more mortgage debt.  Mortgage debt fuels the entire economy. It fuels new housing construction, it drives home renovations and it drives consumer spending as people feel comfortable spending more than they make when they could just add their spending to their Home Equity Lines of Credit (HELOC) at minuscule interest rates.

The economic highs that come from rising mortgage debt make it hard for finance ministers to do the responsible thing and take action early to cool the debt binge. Instead, they wait till it’s too late, when the debt levels are so out of control that they need to take very drastic measures to cool things down – like increasing the qualifying rate for mortgages by 200 basis points (2%) overnight.

Dramatic policy changes are going to have dramatic effects on the housing market. It’s unfortunate that the federal government’s stress tests have made condo prices less affordable and more vulnerable than before.

get latest news & updates to your inbox